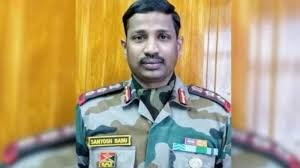 Hello friends, today we will talk here about our real hero Colonel Santosh Babu, who has been corrected in the attack of the cowardly Chinese army in the Galvan valley of Ladakh, then will know about him from the beginning to the end, how and when he was born. Joined

Santosh Babu was born in Suryapet district of Telangana state and his father's name is B Upendra who is a bank employee and mother's name is Manjula who is a housewife and his wife and two children are Santosh Babu's early education at Sainik School Hyderabad Santosh Babu, who completed his schooling, sat in the exam of National Defense Academy and cleared and became an officer in the army to achieve his goal.

Santosh Babu, after completing his training at the National Defense Academy, got his first posting in the 14th Vatlian of Bihar Regiment and the first pasting took place in Jammu and Kashmir and the year was 2007.

There was a dispute between India and China over the Galvan motion, which happened due to the policy of infiltration of China because China keeps its eyes on the land of others and leaves no opportunity to grab but he forgot that it is not Tibet And this is the Indian Army, where it will face the heroes like Colonel Santosh Babu. According to the agreement of June, the Chinese Army had to go back and the Indian Army also had to retreat. According to the agreement, the Chinese Army did not retreat, to see that Santosh Babu Their small contingents were taken but there the Chinese army had put up their tents and they were ready to ambush a large number of weapons and asked Santosh Babu why he did not go back and why the Chinese army put up the tent. This showed Santosh Babu to tell them to go back, so the Chinese army attacked with big stones and dhar dar weapons, which the Indian Army also responded under the leadership of Santosh Babu and suddenly one stone got to Santosh Babu and he From the valley, he fell into the Galvan river, due to which he got right, but on his way he did such valor To show how many Chinese army's neck was broken and 20 soldiers of Indian Army including Santosh Babu were corrected, while 50 to 40 killed Indian army was 100 while the number of Chinese army was 400.

Our heroic son Santosh Babu was on the border for the last 14 months and in a few days his transfer was going to be in his own city in Hyderabad due to which his family was happy that his parents were happy that the beta will come closer but it will be something else On the night of 2020, our Colonel Santosh Babu showed his might and sacrificed his life to protect his motherland.

As soon as the news of Sahid Colonel Santosh Babu's help reached his parents, he was very sad to lose his only and young son but the pride of dying to protect the country amid the tears of those eyes was also very much Santosh Babu's parents could easily be seen in the eyes and brought those words to their tongue and said, "I am proud of my son's sacrifice who sacrificed his life while protecting the land of India, while the canal of India." Eye was the name of this Sahidat, and every Indian was feeling proud and on the bravery of Santosh Babu and his soldiers, where people like Colonel Santosh Babu are dying, they give inspiration to go and help them become Santosh Babu. Live immortal and live in people's hearts.